Following our recent Hedgehog Highway event, this week’s topic is about our spiky friends.

Whilst only five minutes from the M4 corridor and 15 minutes away from Heathrow airport Stockley Park is a niche full of different species of wildlife. With a great variety of insects, amphibians, mammals and birds, we are excited to announce that there is indeed evidence of hedgehogs Erinaceus europgeus on site.

This is exciting news for Stockley Park as there are fewer than one million hedgehogs left in the wild.

There are 17 different species of hedgehogs which are native to Africa, Asia and Europe. Hedgehogs are no longer found in North America as have become extinct within these areas. It is also illegal in some parts of the US, such as Arizona, California, Georgia, Hawaii, Pennsylvania and New York to keep hedgehogs as pets, and a license is needed to legally breed them. It is thought these restrictions have been enacted due to the ability of some hedgehog species carrying foot and mouth disease.

In the 1950s there were thought to be around 30 million hedgehogs in the UK, that number is now thought to be less than one million.

Factors that are affecting the declining numbers of hedgehogs are due to environmental changes such as loss of habitat and fragmentation of habitat and badgers, as they are a natural predator of hedgehogs and they tend to avoid areas that have a high badger population.

Hedgehogs are an important species for the health of the natural world because they feed on the soil invertebrates maintaining a healthy, stable invertebrate population within the soil.

There has been an increase in invertebrate species richness and a decline in diversity, due to this the grub in which hedgehogs favour to eat has dropped, reducing their food variety. Also, their faeces is a good nutrition factor for the soil.

It is of importance to try and establish gardens to be more hedgehog friendly to help encourage the population of the species. We at Stockley Park recently held an event where occupiers were invited to build hedgehog highways before placing them around the Park. We are excited to announce there have been hedgehog tracks located in one of the tunnels. This is an uncommon occurrence and a rare sighting as the hedgehog species are now endangered and protected species. Please see the images of the tracks below.

If you are interested in making your garden hedgehog friendly and to help give biodiversity as voice, please use the following link: 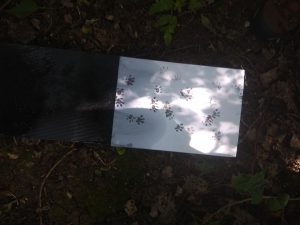 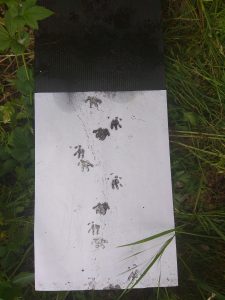